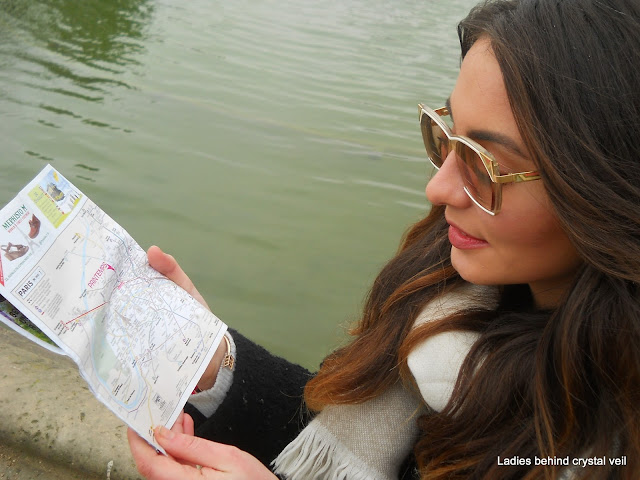 These remarkable Cazal glasses were sent to me a couple of years ago by Frank and Maureen, a friendly couple from England. Rather than throwing out Maureen's old glasses, they contacted me and offered to send me this pair if I felt that the glasses could be used in future photo shoots. My answer was "Yes, please" - Cazal always stood out. Their frame design, best described as "not for the fainthearted" was consistent and it yielded them a niche in the highly competitive market. The lenses were of special interest as well. Trifocals were - and still are - rare sightings in the streets. They were an invention of the late 1970's but the visibility of the demarcation lines left them unpopular in the competition with progressives.
Sonia and Maureen have an almost identical prescription for long distance so the Cazal glasses were among the first pairs selected for the trip to Paris with Sonia in mind. This photo was taken upon my special request. Sonia is actually studying the tourist map of Paris through the reading segments in the Cazal glasses. Although her own accommodation is still perfect, Sonia was interested in making the acquaintance with these complicated but intricate lenses. She declared this capture one of her favourites among the samples sent to her after the photo shoot and she was absolutely right!
Gepost door ogoloog op 16:57