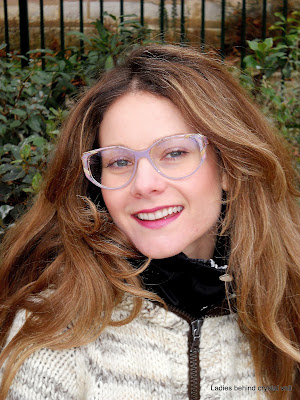 "Lord Lentilux, can you explain to me why the magic had gone? And why did it take a bit longer to return?"

"Perhaps you should compare it with your own practice. The power of light, the changes of your hue. From what you told me, I got the impression that the results are getting better during your own practice sessions. Is that right?"

"Absolutely. It takes a while to concentrate properly and then I get into my stride"

"That's it. Well, the same goes for the magic in the glasses from my collection. As I told you before, the magic works.... but it's not completely clear to me how it works. Not yet. But I do know that it has to do with concentration from my side. And that may explain why the magic was gone. I was rushing towards the hotel to get the cardigan and the camera. These practical things were on my mind and as a result, I was unable to concentrate on the glasses"

"Ah, I see.... So it means that the magic only works as long as you are near the glasses"

"And concentrate on them, yes"

"Yes, I did, but it's really two way traffic. I need you for it and you need me. Otherwise it doesn't work. We create the magic together"

"Yes, in a strictly platonic way, except when Lady Lentilux is involved. Her first name is Nel and she is my life partner"

"There was no magic in my collection of glasses before I met her. It was just a nice collection. And then along came Nel. She put the heart and soul into it. A year after we first met, I asked her if she would like to try some glasses from my collection. She knew that there was a collection in the house but it had no meaning to her. But she became curious and she said OK, let's try"

"Does your Lady Nel wear glasses in everyday life or does she have perfect eyesight like me?"

"Isn't it the way with the women.... They ask questions. But I might have some questions for you as well, remember? The camera, the modelling and so on"

"Sure, no problem. Well, the start of it was actually rather funny. You see, my Lady Nel is very shortsighted. Her glasses are minus twelve so she really needs them. When I suggested that she could try some glasses from my collection, she cracked up and said to me that nobody had glasses as strong as hers. She was quite surprised when I produced a tray filled with glasses near her own prescription. She put them on, one by one, and then it started to happen. It's a much longer story but this is the nutshell version"
Gepost door ogoloog op 03:55