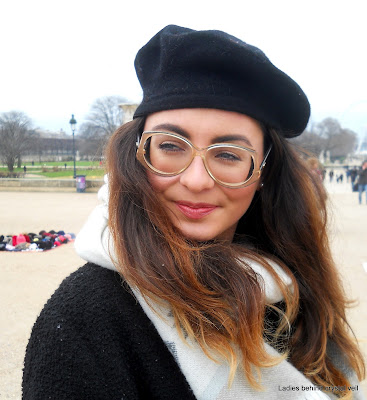 My short visit to Paris (arrival on January 21st, departure on January 24th) was arranged around an appointment to meet Sonia, one of the most acclaimed bloggers in France. Together with a friend called Cerise, Sonia is also involved in making wonderful video documentaries about Paris. Over the past few years, I received several inquiries about inviting Sonia for a photo shoot. She and I already had an occasional email exchange about glasses related topics. Just when I was about to send her an invitation, the attacks took place so the invitation was delayed until shortly after Christmas. To my delight, Sonia kindly accepted the invitation straightaway. We discussed various options including a duo photo shoot but eventually that concept was replaced by a photo shoot focusing on Sonia all by herself.
Our agreed meeting point was at the Petit Arc de Triomphe, just opposite the Musée du Louvre, a perfect place to start a pleasant walk in the direction of the Eiffel Tower. The previous day, it was rainy in the afternoon which forced me to find a suitable indoor location just before the arrival of the second model scheduled that day. Fortunately, the next day brought dry weather so I decided to walk from my hotel near Gare de l'Est to the meeting point with Sonia. Choosing two straight lines (first all the way down Boulevard Sebastopol, then Rue de Rivoli) enabled me to reach the meeting point well before the time agreed with Sonia so I went for a quick reconnaissance walk towards the Eiffel Tower. I had every inch of trust in Sonia as my guide but it's always handy to have an impression of the area before doing the actual photo shoot. Fortunately there were many suitable locations, the very best of which was already taken by the participants of a model photography course! Half a dozen men armed with large, expensive cameras, listening to their teacher, and a lovely model patiently waiting for the next instructions. It made a nice, interesting sighting.
Arriving back at the meeting point well in time, there was clearly no need to worry about missing each other in the crowds. There were more street vendors than tourists near the Arc and it struck me that they were all selling the same goods - either hats or small replicas of the Eiffel Tower. None of them had a real niche.
Sonia and I recognized each other from a distance and we waved. She was accompanied by her younger brother who was appointed our assistant straightaway. His name was Helder and his presence was instrumental other respects as well. It's often convenient for a model to have someone familiar serving as a beacon during a photo shoot.
Here we see Sonia posing in a beautiful pair of Silhouette glasses made in the 1970's. The black cap ("baret" in French) is a stereotype - as French as French can be.
Gepost door ogoloog op 11:18