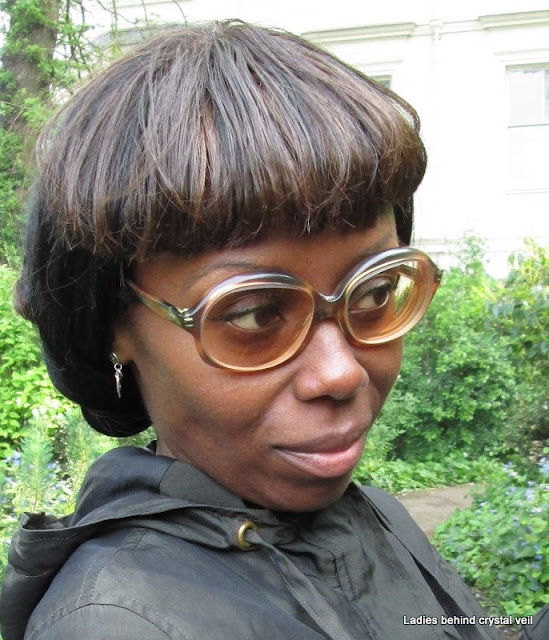 There is a nice story attached to the Cardin glasses shown here to great effect by lovely Nicci. In the late 1980's I experimented with prescription glasses as a decoration in the house. An entire wall in my bedroom was filled with large mirrors and some eight inches in front of these, there were large pieces of plexi glass hanging from the ceiling. Many small holes were drilled in the floating plexi glass so that lots of prescription could be squeezed in. It was fascinating to see the play of the light through all those prescription lenses, especially at night. In 1989, a nice young lady from Denmark stayed at my place for a week. We first met a few months earlier on a campground in Switzerland and talked until the cows came home. Shortly afterwards, she sent m a letter. Her relation had just broken up and what she wanted was a long pub crawl with me. Sure, be my guest, there is a spare bedroom for you and we can talk about whatever you like. She knew that I was divorced recently and in no condition for a new relation. But over the days, there was a mutual element of flirt in the air so the spare bedroom concept was eventually abandoned. When she entered the bedroom, all she could gaze at was the huge construction on the wall with the floating glasses. "That's the weirdest thing I've ever seen". I then told her the story about my life long history with glasses. How my Gran first showed me how glasses work when I was six. How it became my dream in my teens to become an optician, a dream that was forbidden by my father after graduating from school. And how I decided to start collecting glasses at the flea markets, as a compensation for that lost dream. She was still hesitating to enter the room so I asked her if she knew her own glasses prescription. Yes, -6.00 in the right eye and -4.75 in the left eye. Well, in that case I have a perfect pair of spare glasses for you. I walked towards the large construction, took the Cardin glasses and handed them to her. She took off her wonky silver hippie glasses and put the Cardin pair on. "Wow... These are perfect!". She then stepped towards the mirrors to check her looks in the Cardin glasses. "Nice, not bad at all, just a bit old fashioned". That broke the ice and the rest was heaven. After she left for Denmark at the end of the week, I sat down and wrote a song about that week. The title was "Viqueen at the wheel" and it later became the trailer of my solo CD "Crystal Veil". No real relation evolved because of the long distance but we always remained friends. And she keeps assuring me that she is proud of her song till this very day.
Gepost door ogoloog op 13:38