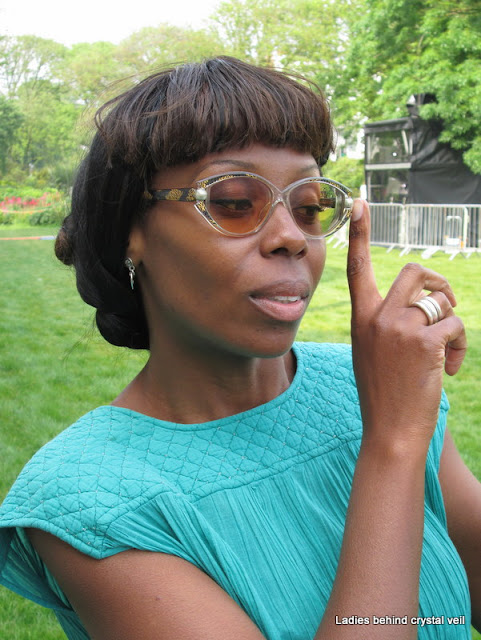 As stated before, Silhouette was one of the very best brands for frame design during the glorious 1970's and 1980's. It's interesting how they reacted when the large frames disappeared from the shops and made way for two decades of rather dull, tiny retro frames. Most brands took to the new style immediately but Silhouette decided to brave the storm for another decade. They then found a new niche for themselves, concentrating on discrete, rimless glasses. It's noteworthy that Silhouette kept experimenting with their frame style between 1988 and 1998. The pair shown here to great effect by Nicci is such an experiment. It's the earliest example of a floating lens in my collection. The frame with its striking silver balls never became popular and I don't remember any sightings in the streets. The style was probably was a bit too extreme for most of the customers. The first owner of these glasses was a German lady who made some remarkable choices with the lenses as well. Being in need of progressives, she opted for one single vision lens and one progressive lens. Perhaps the choice was made for safety reasons. Even more remarkable is the color of the lenses. Yellow is not an easy color. Photos of models posing in these glasses require dedicated editing work. Anyway, Nicci was not bothered by the eccentric aspect of these glasses and she commented that they gave her perfect eyesight.
Gepost door ogoloog op 23:40