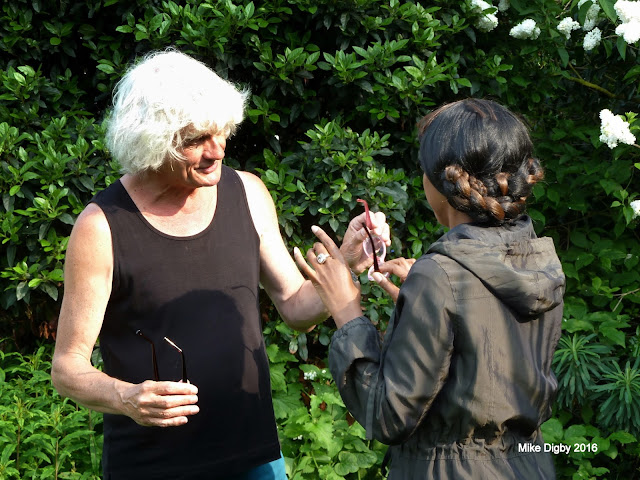 Mike's role during the photo shoot was arguably more difficult than my role, for two reasons. One obvious reason is having to work from a larger distance. But the main difficulty was of course that he was asked to take his pictures without interfering with the way Nicci and I were at work. So well did he succeed that for most of the time I clean forgot about his presence! To be honest, this would have been beyond my powers a few years ago. It's a bit like performing solo as a singer-songwriter on stage. It takes several years to be able sing and play on stage in a flow that implies a certain degree of withdrawal from where you are. This was the school I went through during the late 1960's. But let's talk photography and modelling. Nicci played an invaluable part in my withdrawal from Mike's presence and role by zooming into my directions, requests, stories - and wisecracks thrown in as if there was no photo shoot going on at all. Here both party glasses are swapped back upon my request to have one final serious pose in the magnifying glasses. Hat off for Nicci and for Mike!
Gepost door ogoloog op 12:01