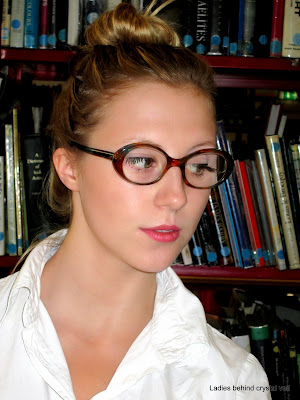 Bonnie is only the second model who posed in these "Jay" glasses. They were featured in my photo shoot with Charlotte in 2010 (first weblog, 036). Charlotte had (and has) a prescription of almost +5, slightly higher than Bonnie. Working with Charlotte was an entirely new and fascinating experience to me - all the effects created by the lenses in the glasses were so different from the preceding series of photo shoots with shortsighted models. Light conditions during that photo shoot left much to be desired so I was always on the lookout for a suitable model with long sight. It's interesting to compare Bonnie's series in the Jay glasses with the series in the photo shoot with Charlotte.
Gepost door ogoloog op 12:14