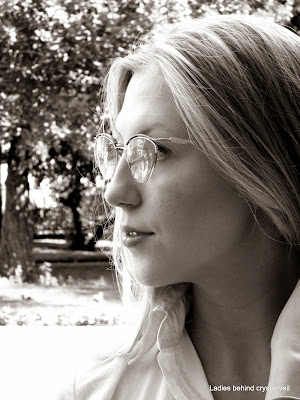 Here is the middle portrait from the previous triptych shown in black and white. It reminded me of an occasion at school in the early 1960's when our teacher left the class room for ten minutes or so. I don't remember what started it but all of a sudden, all my shortsighted and longsighted class mates started exchanging their glasses. There were many remarks like "I don't see a thing through these glasses - how on earth can they be of any use to you?", followed with laughter. Looking back, this made sense as the Rx of the glasses varied from severe long sight to extreme short sight. It was a pretty good scene until interrupted by the teacher.
In the early 1980's, a much respected old Irish pipemaker called Dan O'Dowd (1903 - 1989) was trying to help me with a defective reed in my set and he asked me to show him the reed for the tenor regulator. He was amazed by the looks of the reed. Far too short. He tested the reed, gave it back to me and simply said, "I don't know how it works, but it works!".
Here Bonnie is looking at the world - and actually seeing most of it - through lenses that give one the impression that it's impossible to see anything at all. Dan O' Dowd was right. It works.... .
Gepost door ogoloog op 16:15