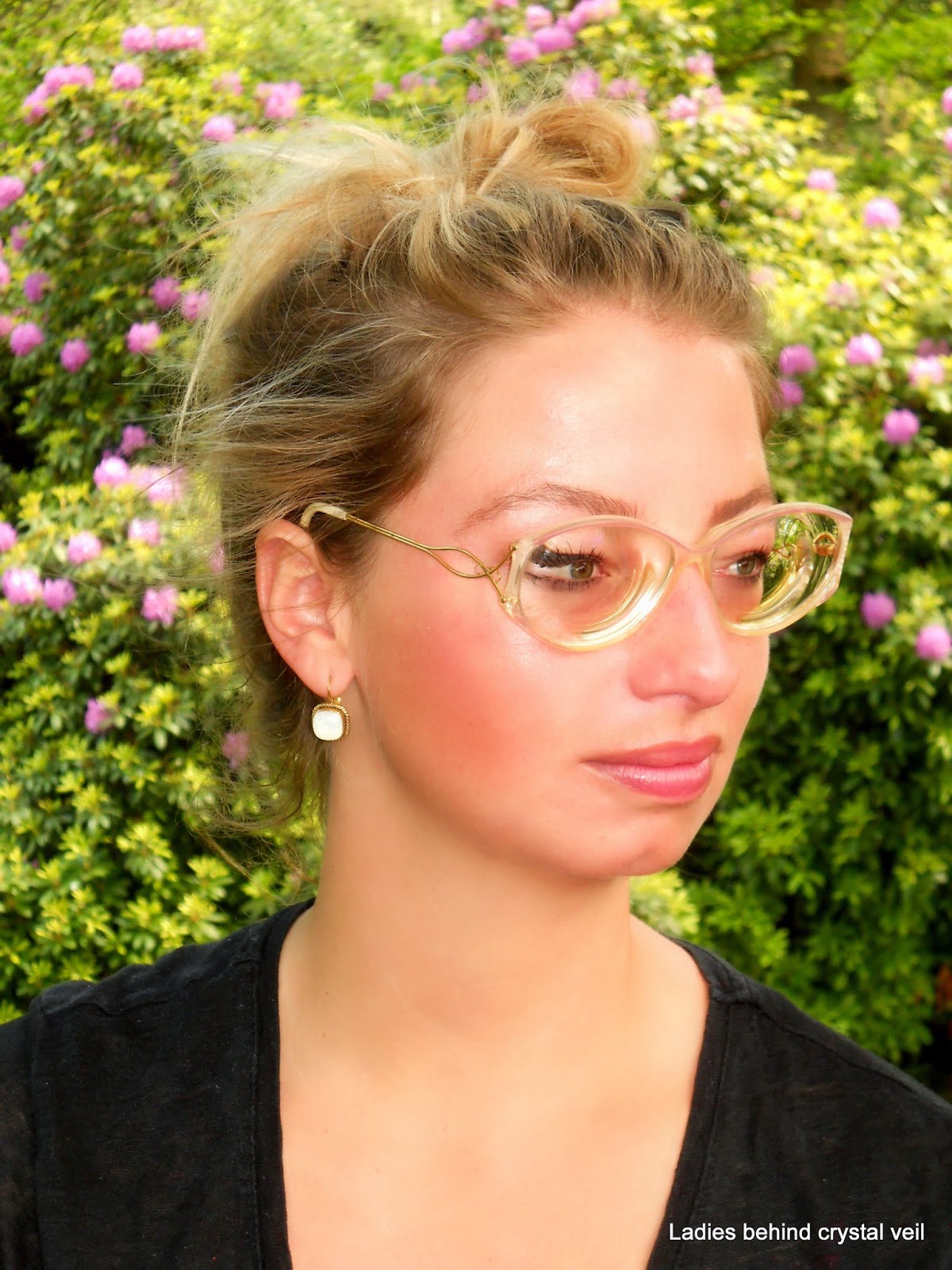 Here Sandra is showing the only aesthetic down side of blended myodisc lenses. From this vantage point, her right eye looks elongated and her make up looks quite extreme in the elongated section. In reality, the effect was barely visible. When I saw the lady in Kufstein, the effects of her blended myodisc lenses kept changing with even the slightest movement of her head. It was a fascinating sighting, something I had never seen before.
Eight years later, I came across the first blended myodisc glasses in a charity shop and bought them straightaway. Shortly afterwards, I came across four pairs of strong glasses that clearly had belonged to the same owner. Two of these glasses were fitted with blended myodisc lenses, including the Flair glasses shown here by Sandra. Back home, I measured the Rx of the four pairs and this, combined with the frames, told the sequence in which the lady had bought and used the four pairs.
The earliest pair was from the 1970's and the lenses were minus eleven. The next pair was from the mid 1980's and was fitted with blended myodisc lenses, Rx minus twelve. The third pair was made by Silhouette in 1988 and the lenses were high index (a novelty at the time), minus thirteen. The Flair glasses, made in the early 1990's, were the final pair and the lenses are minus fourteen.
It's a well known fact that most people with mild or average myopia (less than minus eight) develop their short sight in their school days and the increases in their prescriptions stop when they are around 20 years of age. But it's different in the case of high myopia (above minus eight) which is usually progressive at a later age as well, although the progress is often rather slow. I don't know anything about the age of the first owner of the Flair glasses but an educated guess (based on her frame choice) is that she was in her mid twenties when she bought the earliest pair and around forty when she bought the Flair glasses. Anyway, her myopia did increase from minus eleven to minus fourteen in 15 years (-0.20 per year). For comparison: my life partner Nel had a prescription of -9.50 when she was in her mid forties and it's now nearly -12.00 in her very late fifties (-0.15 per year). Her slower progression may have to do with age but also with the fact that Nel is slightly less myopic is than the first owner of the Flair glasses. For the record, dry eyes forced Nel to switch back from contact lenses to glasses when she was in her mid forties and at first, she was not happy with the switch because of the tiny eyes. However, by the time I met her she had changed her mind as (in her own words), "My strong glasses conceal most of my wrinkles".
But let's return to the unknown lady who owned the beautiful Flair glasses. It's interesting that she made the switch from blended myodisc lenses to high index lenses in 1988 and then a switched to blended myodisc lenses within a few years. This would lead me to beleive that she was not satisfied with her high index lenses.
Both lens types have their advantages and disadvantages.
The final quote in this narrative comes from Sandra. During her photo shoot, she obligingly posed in half a dozen myodisc glasses and near the end of our work, she said "I'm glad that I don't need such strong glasses myself!". Many models who posed before Sandra said exactly the same thing.
Gepost door ogoloog op 15:18