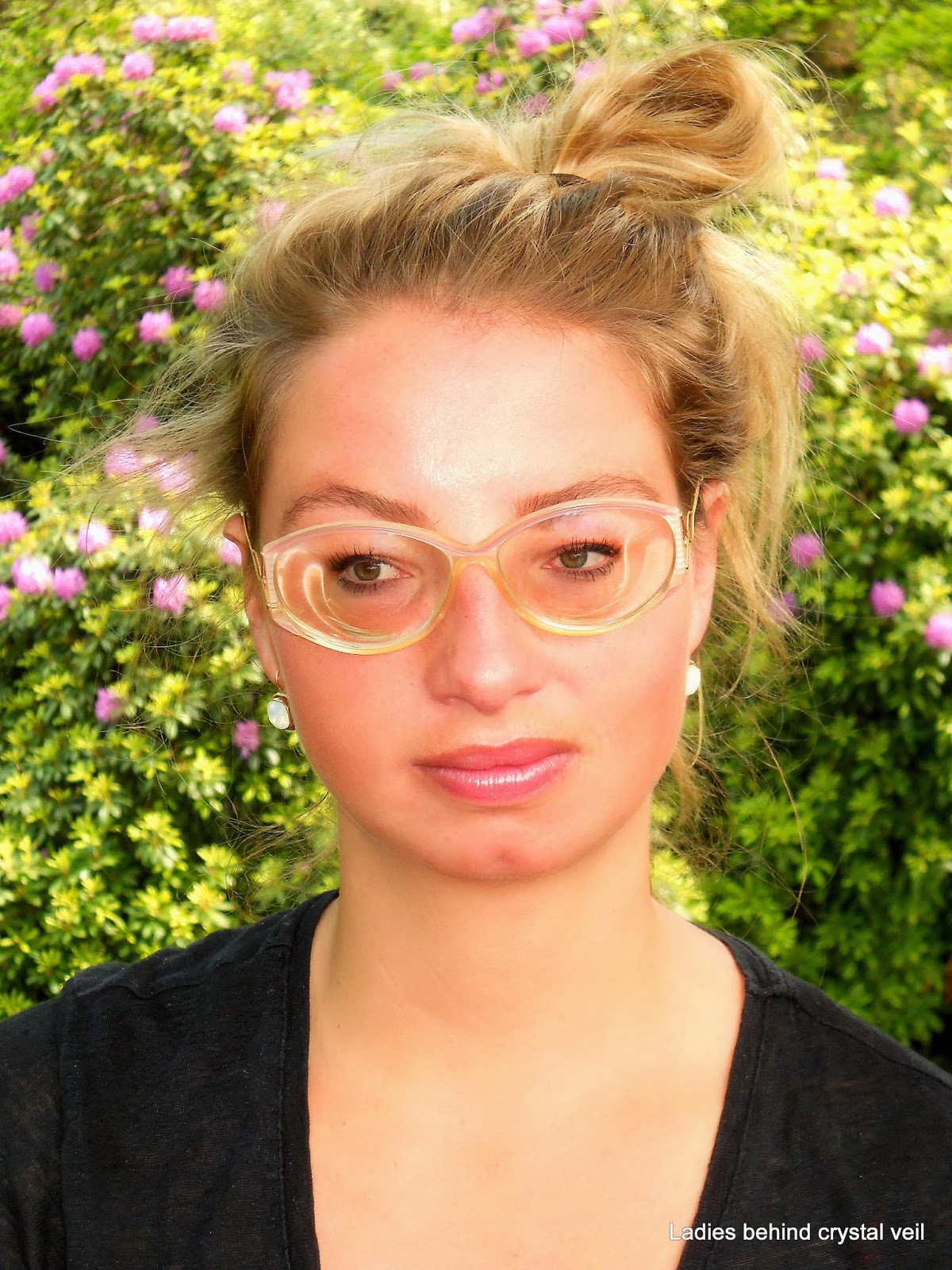 These magnificent glasses by Flair belong to the gems in my collection. The pink frame is very attractive and the intricate lenses with their dazzling light effects are fascinating. Earlier in this photo shoot, Sandra was posing in vintage cat eye glasses with traditional myodisc lenses ("Keislenti) and also in an invention of the early 1970's called "Formlenti" myodiscs. Both types of myodisc lenses had the aesthetic disadvantage that the sharp demarcation between the central part of the lens (with the strong correction needed by the wearer) and its surrounding carrier lens was very, very visible. Introduced during the early 1980's, blended myodisc lenses were a major aesthetic improvement for ladies with extreme myopia. Here the sharp demarcation between the central "bowl" and its surrounding carrier lens is replaced by a gradual transition zone.
I first saw a lady in blended myodisc glasses in 1988, in Kufstein (Austria) and it struck me that this lady was quite self assured and even at ease when I looked at her. Completely different from the shy reactions from ladies in traditional myodisc glasses during my schoolboy days.
Here Sandra is showing the Flair glasses from their aesthetic flattering side. The lenses are minus fourteen but they show neither the power rings or the "cut in effect", inevitable features of very strong lenses. Instead, the transition zone in the lenses catches the light a mysterious way.
Blended myodisc lenses were a fascinating invention but they always remained white ravens in the streets and I can only recall half a dozen sightings. The last sighting was nearly ten years ago.
It is my belief that a good commercial campaign with flattering photos of models in blended myodisc glasses could have done miracles in the 1980's and afterwards but given the strict taboo on prescription lenses in commercial eyewear photography, this did not happen. Even nowadays, brands and opticians only show pictures of models in plano lenses or, even worse, frames without any lenses. I know of no other industry that only shows half the product they are trying to sell.
One of the major aims of my project "Ladies behind Crystal Veil" is to show the industry that the taboo on prescription lenses in their photography is completely outdated and even rather silly. Another major aim of the project is showing the optician's customers that there is nothing wrong with their looks in glasses, even in extremely strong glasses. My models are the ambassadors in this one man campaign.
Gepost door ogoloog op 12:52