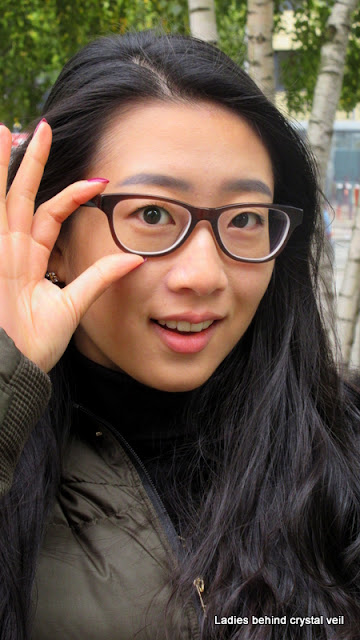 It's one year now since going on retirement but I will never forget the farewell reception at the university. Two ladies surprised me by their choice of suitable presents, donating their own old glasses to my collection. One of them was Carla who posed for me in 2009 and astounded the visitors at the opening of my first photography exhibition with "Ladies behind Crystal Veil" in the following year. Carla managed to do the second round of the catwalk wearing the pink blended myodisc glasses by Flair (minus fourteen) on five inch spikes without stumbling. Her amazing performance can be seen in a video clip on You Tube under my user name Lentilux. Carla donated me several glasses including two Zenni pairs that were the fee for her historic photo shoot. Carla's donations were featured in my photo shoot with another fantastic blonde freelance model called Xenia on a beach near Athens in May. The other lady who gave me her old glasses is called Mariska and her donation came as a real surprise to me as she never posed for me. Mariska calls her glasses "the coke bottles" and although this is quite exaggerated, her prescription is somewhat out of the ordinary because of the substantial astigmatism. It took me a while to find a likely candidate for Mariska's glasses but I brought them to Berlin with Clare in mind. After seeing how well Clare handled every prescription under the sun, I produced Mariska's glasses during the photo shoot. Clare seemed immune for the major distortion caused by the cylinders, producing a series of great portraits without any visual effort. Great!
Gepost door ogoloog op 11:21