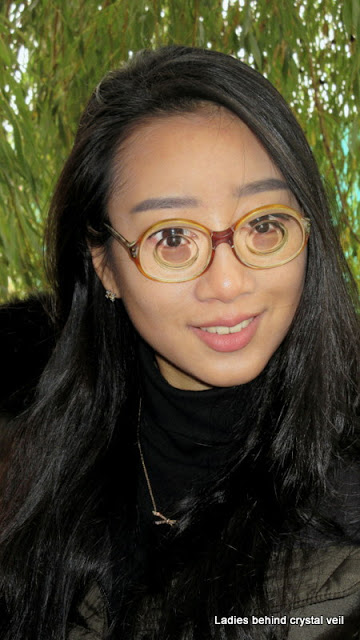 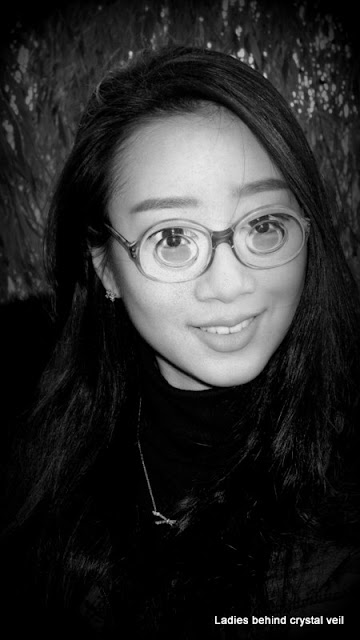 A color version and a black & white version of a fully edited portrait showing Clare in early 1970's myodisc glasses from Germany. Many girls and women in need of prescription glasses make selfies depicting them looking over and through the glasses at the same time. I never came across a written explanation for this ambiguous way of self portraying. I can think of two explanations. My first guess is that it has to do with the desire of these girls and women to show both their faces at the same time. Another, perhaps more likely explanation is that the subjects would prefer to take selfies sans glasses but still need their glasses to make the selfies.
Whatever their motives, the images crossed my mind when Clare was posing for me in these myodisc glasses used by a German school girl 45 years ago.
What actually happened was this. Clare had a bit of trouble raising the glasses to a point where she could use the bowls. Instead, she was looking through the upper part of the carrier lenses. In retrospect, she had to deal with two practical problems at the same time: the low position of the tiny bowls and the fact that the slightly positive carrier lenses were much closer to her minus five prescription than the extreme minus prescription in the bowls. Instead of asking her to raise her chin, I snapped. Translated into the world of thought shown in the world of selfies, Clare's expression here would be something like this:
"Do you like me better as a longsighted girl or as an extremely shortsighted girl?"
We are able to choose our frames but none of us can change our prescription in glasses, except for steps like laser surgery, IOL implants or - on a temporary basis - GOC (Glasses over Contacts). None of my models ever used GOC and it's my intention to keep it that way. There is no need, given the astounding ability of many models to look natural and credible in glasses fitted with many different prescriptions. Still, there may be a hidden preference among young women faced with eyesight problems. Three years ago, one of the models posing for me in Ireland confided to me that she would soon go for an eye test as she felt she needed prescription glasses. After seeing her portraits, she wrote to me "I hope I will get the magnifying glasses!". Soon afterwards, it turned out that she was in fact longsighted so she got the prescription she preferred. Lucky girl....
Gepost door ogoloog op 16:23