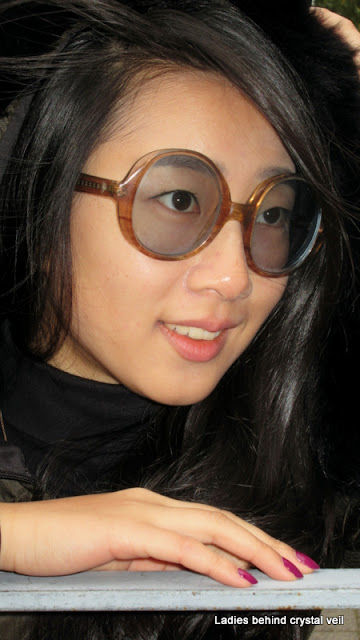 These Saphira glasses were an extraordinary find at the Waterlooplein flea market during the mid 1980's. The flamed brown frame material was a minor hype during the mid 1970's but what sets these glasses apart is their extreme height. The lenses are 50 millimeters large but - quite unusual - no less than 57 millimeters high. There is no way of telling what the facial shape of the first owner was like but I'm absolutely sure that coming across her in the streets must have made a remarkable sighting. The thumb rule in frame choice is that the glasses should be complementary to the shape of the face. Square or rectangular faces need rounded glasses. Round faces need angular glasses, and so on. But this thumb rule often went overboard during the 1970's when everything was about experimenting. Take the eyebrows. There was a dogma that the upper rim of the frame should always follow the shape of the eyebrows. But in the mid 1970's many of the giant frames simply ignored the eyebrow shape, replacing it by an entirely different shape situated at least one centimeter higher. This photo of lovely Clare clearly shows this new attitude in frame choice forty years ago. Clare has rather straight eyebrows but the Saphira glasses change them to oval eyebrows. This completely changes the aspect of her face and it is my belief that this is the effect the first owner of the glasses was looking for. Although struggling with the hood of her coat because of some fierce gusts of wind, Clare managed to deliver a a wonderful series with delightful posing in the Saphira glasses. Hat off for Clare!
Gepost door ogoloog op 06:02