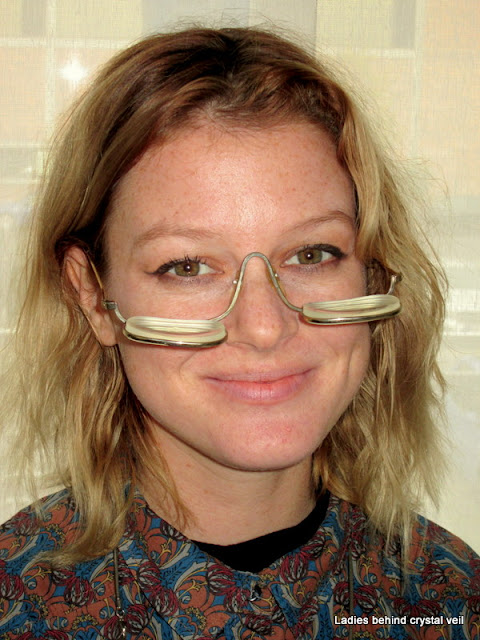 All good things must come to an end.... This happy portrait of smiling Monique marks the end of her wonderful photo shoot. Monique is the 78th Lady behind Crystal Veil.

A word of thanks goes to Wassja, the owner of the coffee bar at Rudower Chaussee for the free coffee and his kind permission to use his premises for a part of this photo shoot.

It came as a bit of a surprise when Monique reacted on my casting call for Berlin. A model all the way from LA.... But of course, modelling is quite international and it soon turned out that Monique was already staying in Berlin. We soon had a clear email exchange and Monique was quite fast with sending the information required for the selection of the glasses. Her motivation for the photo shoot was that it sounded like something out of the ordinary, something special. The first thing I noticed in her portfolio was a portrait with lots of freckles. Nice, and a novelty to the project. So during the selection of the glasses, I "treated" Monique as if she was a redhead rather than a blonde and this turned out a good approach.

Monique, it was a pleasure to hear and watch you during the selection of the glasses on the table in the apartment! Many models with 20 / 20 vision leave the choice to me as they have no experience with glasses whatsoever, but you were different. Quite outspoken in what frames you liked and disliked. I noticed that frame shape was often the decisive factor. You sounded as if you had been wearing prescription glasses all your life. But you invariably made the right choices and this contributed a lot to the outcome of the photo shoot.

When we started the actual shoot, it struck me that you have a patient way of posing. Patient but far from monotonous - it was amazing to see how you kept switching from a neutral look to an intense look and back.

The actress in you came to the forefront when you started posing in strong glasses that only created a massive blur. Again, there was nothing theatrical in your posing. It was a style best described as quiet but clearly with the eyes of an observer. This may sound like a contradictio in terminis because of the strong lenses, but the photos in this documentary testify to that. You took directions quite well and I was amazed by your quality to open your eyes just enough to create an intense look rather than an expression that might have been over the top. Your posing was an excellent example of "minimal art" and that's a compliment.

An unintentional but surprising aspect in your posing was that you occasionally looked like my life partner Nel in her younger days. And when we switched to the strong cataract glasses, you could easily pass for the twin sister of a dear friend of mine in Ireland. I never had that experience during any preceding photo shoot. It was certainly something I never expected. A good actress is able to look like anyone she is playing in her role, but in your case there was no script that included the ladies in question. In short, it was a wonderful experience working with you. I wish you a great continuation of your acting and modelling career in Berlin. Monique, thank you so much!
Gepost door ogoloog op 10:43