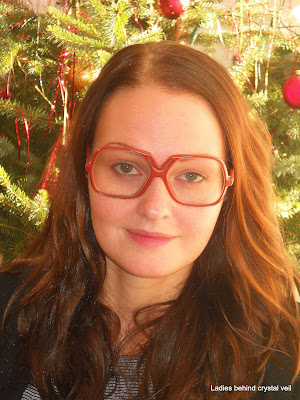 Around 1973, an eyewear advertisement in a Dutch magazine drew my attention. It was an initiative of a national organisation of opticians. The message was that cat eye glasses and the small, compact frames of the mid 1960's were completely outdated and needed replacement by the modern, large glasses. The models in the accompanying pictures were instructed to look confused or depressed in the outdated frames, and put on an excited or at least happy face in the modern frames. Needless to say, there were no lenses, not even plano lenses, just empty frames. Even in those early days as a glasses collector, I felt that it was rather silly to use empty frames in an advertisement, especially in what was supposed to be old glasses that had to be thrown out. One of the most striking new frames in the advertisement was the Silhouette shown here by Mirjam but in a different color.
Gepost door ogoloog op 08:50