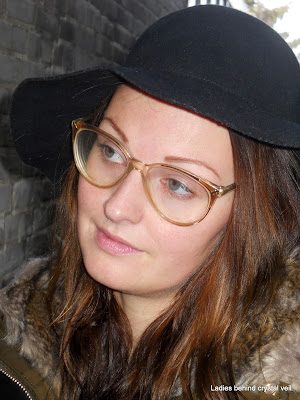 Armed with winter coats, Mirjam and I headed towards an alley at the opposite side of the street. Here she is posing in a nice, nameless pair of glasses from the late 1980's. After nearly two golden decades of large and sometimes eccentric frames, designers came up with subtle, almost discrete frames. The glasses shown here by Mirjam were featured in three previous photo shoots (Brigitta 009, Nanda 056, Iris 325). The first owner of these glasses also used an identical frame (in mauve and pink), fitted with slightly stronger lenses. There are three possible explanations for the difference of -0.50 between both pairs. The honey brown pair shown here may have been used as readers but it's also possible that they were the lady's everyday glasses. In that case, the other pair may have been used for driving at night. The third option is that the lady bought this honey brown pair first but needed a small increase after a short while. In that case she must have felt lucky that the frame was still available, in a different color setting. The slightly stronger twin pair was recently featured in my photo shoot with Linda.
Gepost door ogoloog op 10:21