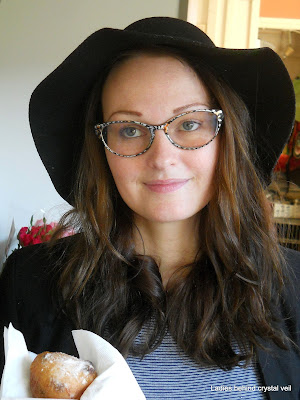 The family name Borghia is probably most associated with a historic figure called Lucrezia, daughter of Pope Alexander VI. Rumors have it that Lucrezia was a "femme fatale" who wore a hollow ring that she allegedly used to poison drinks! By contrast, there is nothing hollow - let alone dangerous - about these beautiful glasses called Laura di Borghia. It could be a brand name but if Laura was the designer of these glasses, she deserves a statue. The frame has been a favorite among my models ever since it was sent to me by a friendly lady from Vienna. There is a touch of the cat eye look. Small wonder that Mirjam took to the style.
Gepost door ogoloog op 13:50