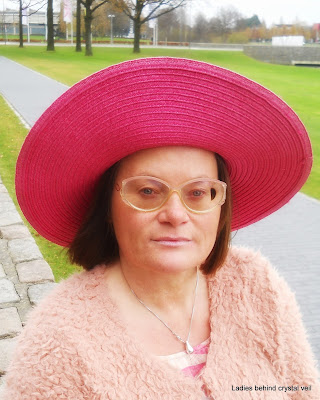 Arguably the finest pair in my entire collection, these Flair glasses soon became a testing piece during photo shoots. The frame is elegant and the special lenses tell a story all by themselves. These so called blended myodisc lenses were an invention of the early 1980's. They offered an aesthetic alternative for the standard myodisc lenses with their clear demarcation between the central "bowl" and its surrounding carrier lens. Here Linda shows two aspects of blended myodisc lenses. The "half moon" image next to the model's left eye shows the position of the carrier lens and also the position of the major "cut in" effect characteristic for lenses of -13. By contrast, the lens in front of Linda's right eye shows no cut in effect and no power rings either.
Gepost door ogoloog op 04:51