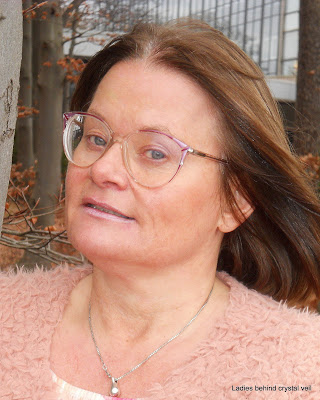 These nameless glasses have an identical twin sister that had to be left out of this photo shoot as its color did not fit into the category "blending with pink". Aside from the color, there is a small but interesting difference between the lenses in both pairs. The twin sister has slightly (0.50) weaker lenses. Both glasses were acquired simultaneously and they were in the same small box. They clearly came from the same owner who must have bought them on the same occasion. There are at least two possible explanations for the 0.50 difference between both pairs. One explanation is that the lady in question was at the onset of presbyopia and used the twin pair for close work. An alternative theory is that the twin pair were her everyday glasses and the pair shown here by Linda was only used for night driving. There is a remote possibility that the lady bought the twin pair first and soon found out that she needed a slight increase. In that case she was lucky that her optician still had the frame in stock.
Gepost door ogoloog op 06:51