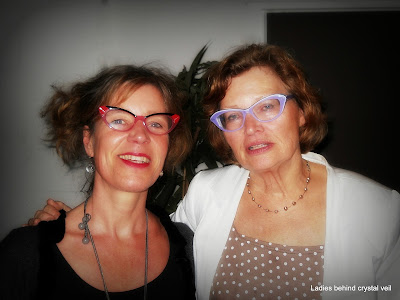 October 13th was the day of the festivities marking my retirement from the university after 35 years. Aside from the reception and dinner, a couple of cultural events were added to the program. I did a music concert in the Amphitheater ("Culture Cracker") featuring guest uilleann piper Carel Lanters who played "The Coolin". I sang a Suzanne Vega classic called "The queen and the soldier" and a famous Irish song "An bonnán bui", learned from one of my favorite singers: Al O'Donnell. I made his acquaintance back in 1980 when he performed at a festival in Amsterdam and he was a guest in my house. Sadly, Al passed away just a month before the "Culture Cracker" concert, aged 71. Three video clips of the concert can be seen on vimeo Rob van Dijk.

But let's talk glasses.... The other cultural event was the opening of a new exhibition with "Ladies behind Crystal Veil". No catwalk this time - that would have been too much. The exhibition lasted four weeks, featuring forty models who posed for me between 2011 and 2015.

Long time followers of this weblog may remember Hiska. She did a fine photo shoot for me and she was one of the ten models who performed at the catwalk during the opening of my first exhibition, in 2010. Hiska had perfect eyesight and we agreed that if ever she would need glasses at a later stage, she would get a free pair as a fee for her photo shoot. A few months before my retirement, Hiska got in touch and she told me that it was time for her first pair of readers. We spent a pleasant lunch break and Hiska checked her looks in a dozen Zenni glasses brought along for the occasion. Hiska always liked the cat eye style so it came as no surprise that she chose this fine pair of cat eye glasses. She attended the concert and the reception, wearing the cat eye glasses on the top of her head. My partner Nel appeared in cat eye glasses by Zenni as well so we withdrew ourselves from the festivities for a moment and I took this double portrait of my loyal models.

Hiska's glasses (fitted with -8.00 lenses) were featured in four previous photo shoots, with Farishta, Maria, Jennifer and Mirjam. Nel's glasses (also fitted with -8.00 lenses) were only featured in my latest photo shoot with Farishta. The lenses in Nel's own pair shown here were made by a company called ciliaryblue, in England.
Gepost door ogoloog op 16:33