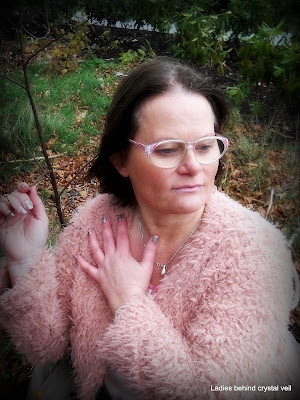 Fine, expressive posing by Linda in a lovely pair of pink glasses called "Janine". Four years ago, I did a photo shoot in my garden with a young amateur model called Esther. It was a pleasant afternoon but we were forced to move around the house several times because of the intense direct sunlight. After a while, Esther and I landed in an alley and this caught the attention of several curious neighbors. One of them was a friendly lady in her early sixties called Jannie. After watching us for a while, Jannie said, "I may have some glasses for you". Within a few minutes, she returned with two vintage pairs in her hands. When I suggested to Esther that she might try Jannie's old glasses, she was all go for it. Jannie was longsighted and over the years her prescription got worse. The pink glasses shown here by Linda were Jannie's second or third pair. My estimation is that her prescription had doubled by the time she gave me her old glasses. Jannie was a gifted poet in the regional dialect of Twente. She died two years ago but her memory lives on among the neighbors. Linda is the first model posing in the Janine glasses since the photo shoot with Esther. It was a cold day and it would be an understatement to describe Linda's fingers as pink. Thank you Linda, for your stamina!
Gepost door ogoloog op 04:23