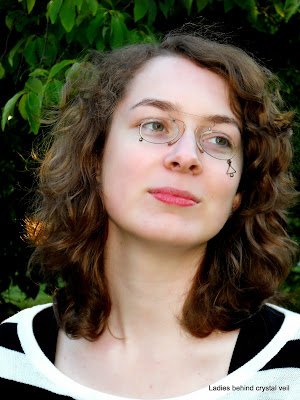 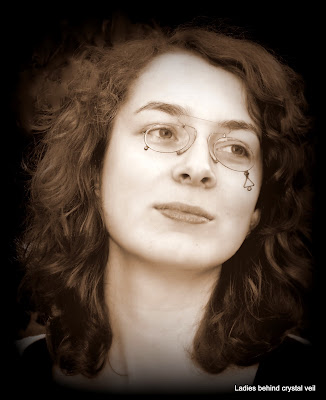 From the 1890's until the 1930's, the unisex pince-nez was a popular alternative for glasses, especially for the middle class. This is an early pair, believed to have been made around 1900. In later years, the design underwent some changes, the final innovation being the use of the newly invented celluloid. Pince-nez are still for sale in antique or bric à brac shops. Nine times out of ten, they are fitted with lenses for reading. so this early pince-nez is a notable exception. Many models find it a fascinating experience to pose in eyewear from the days of their great-grandparents and Juliette was no exception. Posing in this pince-nez was all the more interesting for Juliette as the pince-nez gave her good eyesight, albeit in mild monovision. One lens is -1.50 above the model's prescription of minus five but the other lens was just perfect. Two versions of this portrait are posting here, one in colour and one in sepia. A century ago, photography was almost exclusively done in sepia so this version is added for its nostalgic feel.
Gepost door ogoloog op 02:28