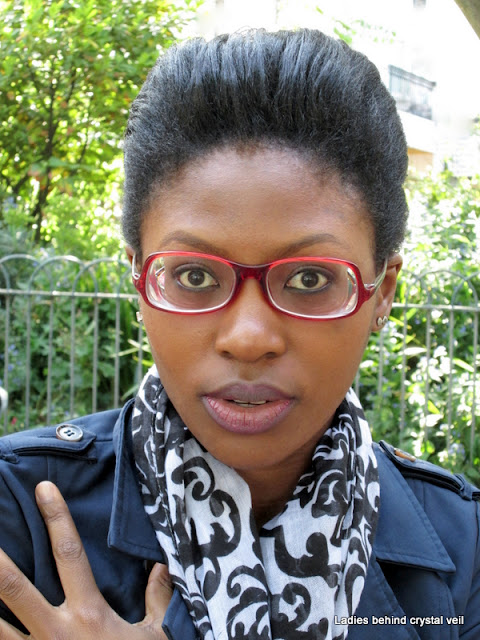 "Time is up....". All good things must come to an end and so did this remarkable photo shoot in the Pavilion Gardens. Miliswa is the 75th Lady behind Crystal Veil.

Posting a casting call for models abroad is always a special moment. As the photo shoots were to take place in either Worthing or Brighton, I expected most reactions to come from Brighton where lots of models are active. To my surprise, only one application arrived from Brighton. Six applications came from London and even further afield. One of these was sent by Miliswa and it was interesting to see her portfolio. The posing style could best be described in the following key words: concentrated, serious, dignified but with a sensual touch.
The email exchange with models is sometimes a bit confusing. This has to do with the fact that I need to know their PD and prescription well in advance to select the glasses in time. Miliswa obligingly measured her PD but she did not have a glasses receipt. Instead, she mentioned that things started getting foggy from about two feet distance. With this in mind, I selected mainly glasses around -1.50 for the first part of her photo shoot. This eventually turned out to be wrong. She only had some + astigmatism but it did not affect the quality of her posing. There was another misunderstanding from my side. Silly me, it never crossed my mind that the common language in many parts of her native Cameroon is not English but French. This only became clear to me during our conversation on our way back to the station after the photo shoot.
The Pavilion Gardens were crowded with school classes on the day of our photo shoot. But Miliswa somehow managed to keep posing undisturbed. Not every model is given to that.
All the qualities shown in her portfolio came out during the photo shoot, but Miliswa had a surprise in store. It was something I never witnessed during any of the 100 preceding photo shoots. Quite a fascinating sighting. She bowed her hear and body down and then rose in a fast, elegantly flowing style right into the pose she had in mind. Almost impossible to capture in a photo although I tried it several times. It would take a video to do justice to this surprise.
Miliswa managed a great, direct eye contact in many photos and she lost none of that quality when we switched to strong glasses. She obligingly posed in myodisc glasses without much visible effort. Her consistent patience and discipline throughout the photo shoot attributed greatly to the outcome.
Miliswa, I wish you a brilliant career, both as an academic and a model. Thank you!