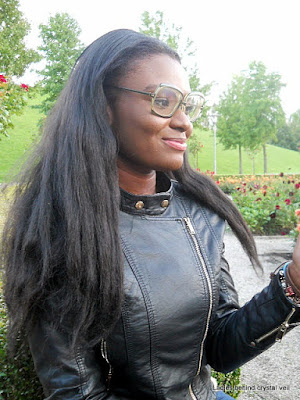 "Mirror mirror on the wall,
Who's the fairest of them all?"
(from the chorus of a UK Top Ten single in 1965 by a long forgotten pop band called "Pinkerton's Assorted Colours" - no joke, pop groups had quite exotic names in those days!)

Actually, the mirror used here by Emma was not on a wall but the melody ran into my head when this photo appeared on screen. I felt that Emma's eyes needed a bit of relaxation after posing in four Zenni glasses with lenses of minus eight. The lenses in these vintage Neostyle glasses are a bit too strong for the model but not much, so why not invite her to look in a hand mirror?