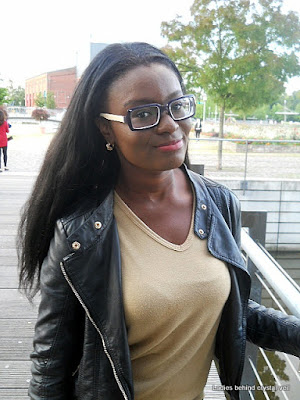 Black models conquered the world during the 1990's and many aspiring sisters followed in their footsteps. Right from the start of my project, I was interested in working with black models but it took nearly four years before a suitable candidate crossed my path. The young lady in question was an amazing freelance model - and crowned beauty queen - from Nigeria called Osi. I will always cherish the memory of the pleasant afternoon with Osi. We worked on two locations in Dublin and it yielded lots of excellent pictures but what impressed me most was the model's warm personality. In her reaction on Model Mayhem, Osi summed it up like this: "I had a blast". The only problem of the day was the size of most glasses brought along for the photo shoots in Ireland. Osi reacted on my casting call just after my arrival in Bray so the glasses were selected with the other models in mind. It turned out that most glasses were too narrow and the arms were way too short.
With this in mind, I made a careful selection for the photo shoot with Emma and this paid off quite well, largely because Zenni caters for all sizes and shapes. These rectangular glasses are an excellent example - just as if they were designed with lovely Emma in mind!
Gepost door ogoloog op 07:39