The lady who first inspired me 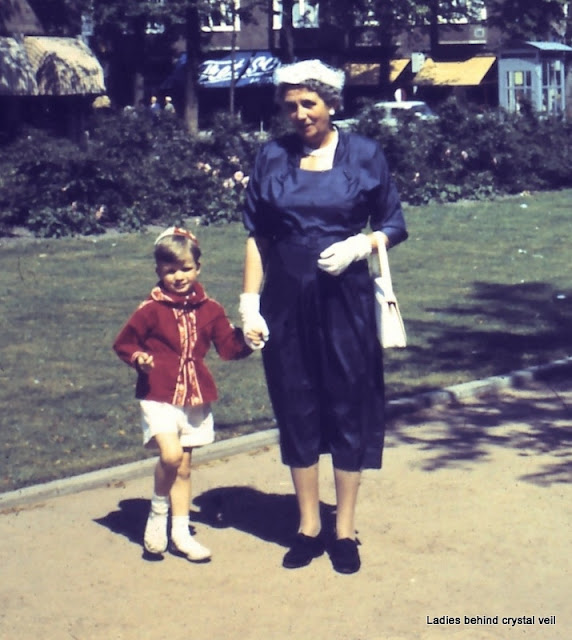 Regular viewers of my weblog may remember the story about how my fascination with glasses started. The lady who gave me my first inspiration at the tender age of six was my grandmother. She was a bit shortsighted (circa -1.00) and she had a rimless pair for watching TV. But being in her mid sixties, she also used several reading glasses including a pink cat eye pair. Vanity was no stranger to her so the glasses came only out of her handbag when it was absolutely necessary. This is the only picture of my grandmother and me. It surfaced last week during another time consuming project unrelated to glasses. My late father Willem van Dijk (b. 1922 - d. 2001) was an amateur landscape photographer but on some occasions he would also take some pictures of his family and his other relatives. He left a collection of 20.000 slides which came my way after my mother died. This photo was taken in 1955 or 1956, around the time when I dared to ask my grandmother why she had all those various glasses. Instead of telling me about it, she asked me to put them up, one by one, and describe exactly what I saw, both in long and short distance. The rimless minus glasses seemed to make everything look ultra crisp but a bit smaller and further away. The pink reading glasses were a sensation. My hands looked quite enlarged and much closer than normal, and in the distance all was blurry. My grandmother did not explain anything and I asked no further questions. It dawned to me that either there was magic in her glasses or - more likely - she was a magician herself. This made sense to me. I was long familiar with the fact that my grandmother had mood swings. She could be withdrawn at times but extrovert on other occasions. In other words, she could push the world away at times and then embrace the world again when she felt better. Soon afterwards, I started observing women in glasses in the streets and I wondered if they were magicians as well. At the age of twelve, it came as a disappointment to learn the basics of optics at school. Apparently glasses were just a tool to correct vision problems. My grandmother died two years before this discovery so there was no opportunity for another talk about her glasses. So I decided that she was a magician after all and so were all girls and women in glasses. It's safe to say that I kept faith to that decision forever after.
Gepost door ogoloog op 12:01