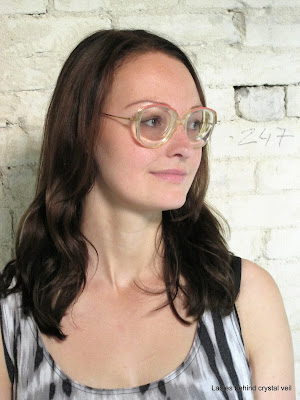 Blended myodiscs were a great invention of the 1980's. Much more pleasing to the eye than the traditional myodiscs. No sharp demarcation anymore between the central "bowl" with its correction for high myopia. The new lens type was called Lentilux in Germany and it seems to have been more popular there than elsewhere. The first owner of the glasses shown by Mirjam was probably one of the first ladies in blended myodiscs.
High myopia tends to be progressive and the German lady in question was no exception. My collection hosts four of her glasses, covering a time span of fifteen years. She was minus eleven in the late 1970's and minus fourteen in the early 1990's. The down side of blended myodiscs is the narrow field of view and the lady switched to the newly invented high index lenses after a few years. Apparently this choice had its down sides as well and the lady bought a new pair of blended myodisc glasses after four years.
Enough talk about the history of lens technology.... Big compliment to Mirjam for her excellent posing in blended myodisc glasses!
Gepost door ogoloog op 13:50