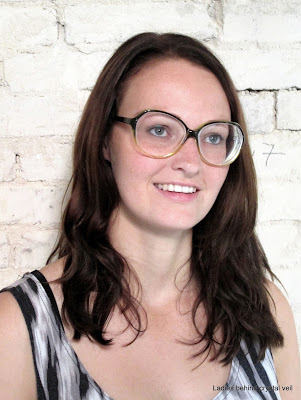 Early roots explained. But let's get back to the theme in this section of the photo shoot - contemporary glasses with lenses of minus eight. What I like about Zenni is that they produce frames that toy with the main styles of the past, but with a twist of their own. The olive green glasses shown here by Mirjam are clearly inspired by the airy, giant style of the mid 1970's. But the shape and the color setting is quite different from what was seen in the streets just before the Christian Dior revolution in 1976. Dior did use the color setting shown here, but their frames were solid and even massive. Isn't it grand that a blend between both styles was created almost four decades later by an on line glasses company in China?
Gepost door ogoloog op 14:54