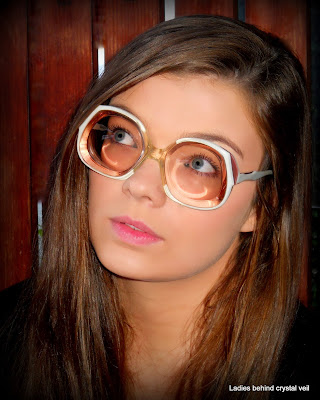 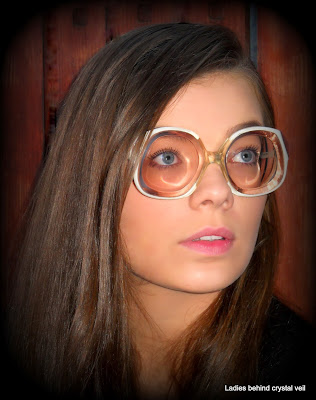 Here Lydia is posing in what has become a testing piece for models because of its beauty and extravaganza. The frame, made by Christian Olivier, is a piece of art all by itself but the lenses are the proverbial cherry on the cake. This lens type is called Formlenti and it was an invention of the 1970's. A major improvement on the traditional myodisc lenses with a circle (also called "bowl") in the middle, containing the correction for extreme myopia. Myodisc lenses were applied when the prescription was too high for glasses to be fitted with ordinary lenses. Depending on the frame size, myodisc lenses were used for myopia above minus fifteen. After the arrival of high index lenses during the second half of the 1980's, this limit was raised to about minus twenty. Given this, the lens choice by the first owner of the glasses is amazing as her prescription was "only" around minus ten. Strong alright, but by no means extreme. My guess is that she made a deliberate choice for Formlenti to make her glasses look even more luxurious than they already were, "showing off rather than hiding". Great!
Gepost door ogoloog op 05:53