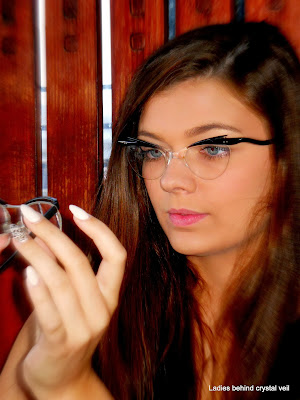 Lydia wearing a pair of "double" cat eye glasses in the style of the late 1950's. I doubt if these glasses are that old. They were acquired in a charity shop in the central part of Ireland. On the continent, the cat eye style became unfashionable in 1964 but in Ireland and the UK, things were different. I often saw elderly Irish ladies sporting cat eye glasses in the late 1970's and early 1980's and my guess is that these glasses were made around that time.
Gepost door ogoloog op 05:48