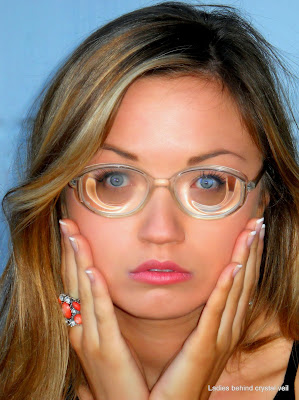 Also called Lentilux, blended myodisc glasses were a great invention of the early 1980's. These lenses were made in an attempt to take away a part of the stigma around extremely nearsighted people that could not be helped with contact lenses. Blended myodiscs were a good alternative for the traditional Kreislenti with their all too apparent circular bowl, surrounded by a carrier lens. In my schoolboy days, there were no contact lenses so anyone with extreme myopia had to wear myodisc glasses. I remember seeing many girls and women in myodisc glasses and they always seemed a bit shy when they felt that you looked at them. By contrast, the first lady I ever saw in blended myodisc glasses looked quite confident and certainly not handicapped at all. This was in Kufstein, Austria in 1988. I knew nothing about blended myodisc glasses but the effects created by the magic lenses in the lady's glasses was fascinating. The play of light and shadow changed with each tiny movement of her head. After coming across a couple of blended myodisc glasses in a charity shop in the 1990's I recognized them as the same magic glasses seen in Austria and bought them without bargaining. Here Colleen shows some of the fascinating light effects in the lenses. The Nigura glasses were steaming up but Colleen was not bothered by that. The lenses are so strong that all she saw was a massive blur, steam or not.
Gepost door ogoloog op 06:51