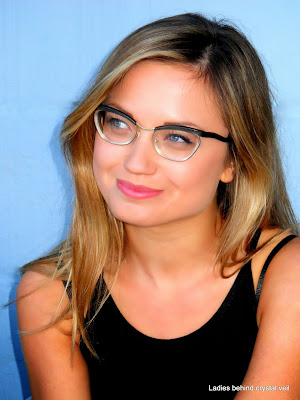 These Nylor glasses were kindly given to me by Peter, a colleague at work. Peter saw my first exhibition of portrait photography and afterwards he talked with his father who is now ninety years of age. Peter's mother died young and the father kept the house pretty much the way it was. Several of the mother's glasses were still kept on a shelf. When Peter mentioned my photography project, his father kindly agreed to let the glasses have a second life. During the past three years, the Nylor glasses were featured in at least a dozen photo shoots. Many models like them because the glasses stand for a glorious era from the past which is often a source of inspiration for the new generation. Besides, there is an intangible quality to the Nylor glasses. Somehow they seem to suit most models. Timeless beauty indeed. Thank you, Peter!
Gepost door ogoloog op 03:28