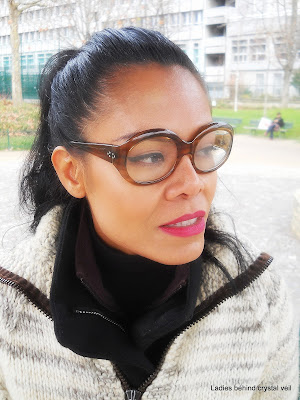 The only down side of these chic glasses by Givenchy is that the lenses steam up frequently. The massive frame with its solid arms serves as a wind shelter. The glasses were featured in four previous photo shoots (Carla 062, Lettie 036, Melissa 031, Jolien 277). The six hour photo shoot with Melissa took place in a garden on a cloudy day with a shower or two. The damp in the air and the shelter by the Givenchy frame gave Melissa some problems as the glasses kept steaming up. Fortunately, she saw the fun of it and she kept sliding the glasses up and down her nose until I managed to take at least a couple of decent portraits. The same procedure was followed by Cat and just like Melissa five years ago, it was good for a few laughs. A good photo shoot is of course about taking great portraits but in my view, having a good time is just as important. In both respects, Cat is in the same league as Melissa. A hard worker, excellent at posing and even acting, but great company as well.
Gepost door ogoloog op 01:29